Main idea: For just a month at most or a week at least, Revert the PD to its old state with changes to adapt to the modern playerbase. Description: Revert the PD With its old "VIP for SWAT / Lieutenant" System for just a week at least, or a single month at most, And see how it works. People...
perpheads.com
Also, discussed in other threads i cba to link.
Main Idea:
For a month, Bring back SWAT.

Full description of the idea:
Lets face it, judging from the discussion on the original "impossible" suggestion for this idea, as well as on the permanent one, its clear that people only seem to give a shit about one thing: Being SWAT".

For the duration of this month long event, anyone with VIP Will be able to go on duty as SWAT. The slots will scale dynamically on player count.
0-9 players: 2 slots.
10-19 players: 3 slots.
20+ players: 4 slots.

SWAT Will just be a stripped back version of Heavy TFU gear, minus the range rover. The model could just be the old SWAT model, since its already in the content packs.
SWAT Will not have head armour as this was deemed too much of a buff in modern day PERP. SWAT officers will not act as supervisors, even if they hold a supervisory rank in the PD.

For those who weren't around when SWAT Was a thing, SWAT Works as such:
- You go on the Job at the PD front desk if you had VIP. Upon joining the job, you would have an M4A1 with a compensator, crane stock, rifle flashlight, and a holo sight, as well as an M9 with a flashlight attachment. You would also have 1 flash bang, 3 breaching charges, and basic police equipment.
- You could change guns in the armoury. The old SWAT primaries before its removal were the MP5, Famas, SCAR L, G36C, Benelli M3, M4A1, M16A4, and the M24.
- The pistols available to SWAT I believe were the P226, M9, Glock 17, Glock 20, USP40, and M1911.
Deployment:
SWAT Could typically only deploy if a supervisor or dispatcher requested so, However, SWAT Weren't stopped ever deploying if an officer claims shots have been fired. To my knowledge, SWAT Could also deploy to warranted properties. SWAT was not like TFU in the sense that they could patrol, guard an area or person other than the PD building, or go after warranted suspects (Unless barricaded in a property or if they were really that dangerous).

Upon trying to join SWAT For the first time, you'll be met with an in game multi choice questionnaire similar to the one for other jobs, except maybe stricter and harder.

Why should it be added?:

It seems to me that this is literally all people want. Change is seriously being considered in this sense but permanent. Maybe if it doesn't get changed permanently, we could at least have this as a temporary thing and see how it goes?

Pros:
- Appeasing popular demand without the risk of permanent effects.
- Could be cancelled at any time if it does go tits up.
- Essentially a guaranteed boost of player count, as people have been saying recently they'd play more if SWAT was a thing. (If it doesn't boost player count then idk what would).
- It being temporary would only give people more incentive to go on the server in an attempt to get a cop slot.
Cons:
- Under staffing of the staff team and ensuing sits of people reporting SWAT officers for previously IA able offences.
- Would put possibly too much responsibility into the hands of people who might not deserve it and further rupture the "SeriousRP" Aspect of the server.
- People might not get a turn, as people may sit and hog the slots 24/7.
- 3/4 of the server sitting in the PD lobby punching each other to death for a slot.​

I'd prefer to know exactly what is going on with us reverting the PD generally before doing this. However, it would be nice to have some form of trial to see the reaction of people in the server.

It's a bit of work on our end, but I'm more than happy to do this and figure out a way to do this. It only seems fair and I could get this trial ready for next week if @Collier and @Madda are interested.
↑View previous replies…

Imo problem with a poll would mean that the majority of people that dont have tfu will obviously vote yes as well as others who dont even play. Im trying to think if this would give less people incentive to play criminal or if it would we better with sweater swat. One thing this would do is make TFU command completely pointless.

I see your point, but not a single TFU Member so far has voted no. We'll see as time roles on however. 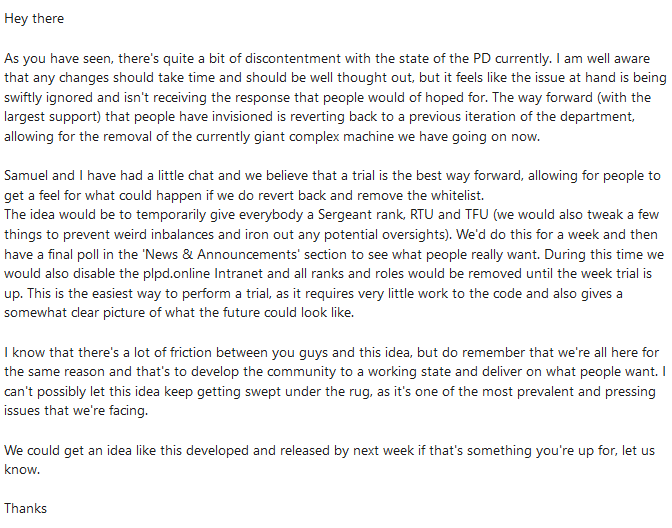 (this is the PM I've just sent Senior Administration)

I mean i reported a cop who was spraying his weapon at people but missing for no reason, didnt get dealt with other than make an IA.

@Daft Punk this should be dealt by staff

Dependent on how much time I have this weekend, we'll be releasing an event like this shortly. The idea will be to give everybody Sergeant, ability to go on duty as TFU and also the ability to go Dispatch without the need for a whitelist. The plpd.online Intranet will be disabled for a full week, whilst this test is in progress. Any and all ranks and roles will be removed during the course of this test, all complaints regarding other Officers will go through staff.

Following this test, we will post a poll on the forums and see what you guys want to do - I strongly suggest you go on the server throughout the week and get a feel for the gamemode from both cop and criminal perspectives. This is a huge change and if we do remove the current structure of the PD and all the work that has gone into it, it will be final, therefore it will need to be planned properly to avoid carnage.

I'll keep you updated on specifics with this 'event' and I'd also like to thank the OP @BigBenji for this suggestion.