We thought it was about time to do some announced events again. Rather than selecting a random few, we'll let people vote on some. If we find a good solution to it we will also try some RP events on top of the normal ones, any suggestions here or in the Ideas & Suggestions threads are welcome! We'll be starting at 5PM UK time. Hope to see you there!

For those of you who should wonder, here is a brief description of each event.

One in the chamber

Players are put in the city hall or business sector with a single round in their gun, you earn an additional shot for each player you kill. If you miss your bullet, you're going to have to use your knife! The player with the most amount of kills after 10 minutes win.

Played in the forest. For each player you kill, you will receive a new firearm. The goal is to go through all of the firearms, and get a kill with the final weapon, a machete by default.

Players are spawned in the farm fields either on foot or in a SWAT van with modified horsepower. In order for the drivers to win, they must run over all other players in the arena. Grenades will spawn at random locations on the field, players on foot needs to retrieve these and attempt to blow up the player in the SWAT van. Once all drivers are dead the game ends.

The goal is to reach a chair and sit on it as soon as the song stops. Those who fail to secure a seat will be removed from the event.

Attackers vs Defenders. The goal for the attackers is simply to eliminate all the defenders, same goes for the opposing team.

A random player is placed at the car dealer, and can only move within a certain range within it. The rest of the players are placed on top of office armed with m24's. Due to the rendering distance, it is impossible to see the player at the car dealership. The goal is to use the skybox and get some lucky hits in. The player to kill the "duck" wins.

Players are spawned in minis on a platform above the beach. The goal is to ram all other players off the platform and be the last one standing.

@Dom_ finally did it.

Tbh I’d be down for a whole day of raids, swat van showdowns and beach Derby’s . Gungame and OITC are overrated and it’s piss easy to cheat on duck hunt by leaving the event area.

I hope the Gun Game issue is fixed by then. The one where the gun is off center when you respawn.

@TinySlayer has done a bunch of fixes for it recently, not sure if he has looked into this.

As per usual, the most common events are voted. I won't be attending unless there are actual decent events.
↑View previous replies…

I only chose Battle Royale as the weapon-based event, and the rest was Beach Derby and SWAT Van Showdown. I cba with raids anymore since they're so quick to finish, like under 2 minutes. I agree with you but I'll still join.

it was good, too bad people can't behave themselves between events

cant believe you MURDERED me in the first clip

looks like you mistook my cooked grenade as an item
F 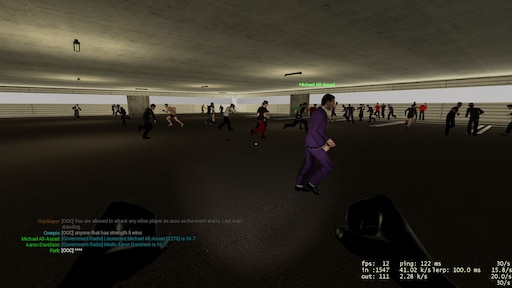 steamcommunity.com
so many people

It's a shame that people also ruin half of them, including the raid, With that ladder.

@Jimmy Jackson Oh, no good. Wasn't there had work

Attackers spawned at scrapyard, someone on our team who was on the wall kept pressing E on the ladder to bring it down.

I did have a lot of fun today with the events even though the flaws on the players end.

This was genuinely a lot of fun, the most fun I’ve had on the server in a while. Keep up the good work