May is a mighty month...

So as you've probably noticed, I've been hyping about some changes coming our way... Which and what changes do you want the most, if possible?

Forget about the guns for a while, we got plenty.

I know vehicles are a pain in the arse to adjust to the server, but more would always be appreciated, along with map changes and clothes.

I'd also love to see more legal ways of making money as currently the only real way to do it is to sell guns which can be a pain in the ass in some cases as people don't realize that you sell them to make money not just to arm everyone up for war.

What changes would you be able to make to the map though? Aren't you at like the maximum limit for space and size on the map or something?

Fix the sniper scopes so they are actually usable. The sensitivity is really aids and they are pointless most of the time due to render distance

How come you didn't made an option for your speciality: Animations (stuff like /act ...)

They are useless but so funny, like some I saw on GTA RP streams lol

I think some things could benefit majorly if they were changed on the map; such as the placement of stop signs and some road layouts

In terms of new weapons, I remember talking to you about a year ago, about the interesting topic of makeshift weapons.

I'd love to see weapons that can be very easily crafted, with low skill requirement, but also not the most effective weapons. These could be really great for a small org of newcomers who don't really have access to the big black market of .50 cal weapons and such.

When talking makeshift weapons, I don't mean in the way of Fallout -ish weapons. I mean more or less melee and throwable objects. You yourself spoke about a plank of wood with a couple of nails jammed into it. This could be a great weapon for newcomers. It could also have some interesting differences from something like a baseball bat. A baseball bat would typically either break bones or knock you out(depending on where you are hit), but a plank with a nail would be better for making someone bleed. I would really love to see people choosing weapons, not because of how expensive they are or how cool they look, but because of the advantages of the specific weapon. This is where I think makeshift weapons could be super interesting. 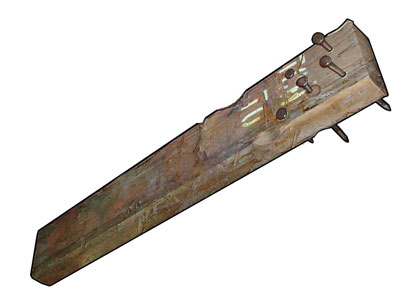 Something else I myself have thought of as a makeshift weapon, could be a cheaper alternative to grenades/molotovs. Let's say you add tennis balls as a purchasable object. This could maybe be used in collaboration with baseballs, to finally give life to the good ol' "I'm only carrying a baseball bat because I love playing baseball" -excuse But also as a crafting item. Let's say you combine 1 tennis ball, and maybe 2-3 packs of matchsticks, you get a makeshift grenade that will explode on impact when thrown. This would of course take quite a while to craft, as it also does the same in real life. If you don't know what these things are, look at this and this. This kind of 'grenade' would not be able to kill. Maybe stun, and severely damage, but not kill. That's what makes this idea so nice IMO. You have weapons that cost almost nothing to create, but they will not do very large amounts of damage, and some of them will take quite the effort to make(crafting time.)

Should probably make a suggestion thread instead, but I'll just throw it out here so you guys can see what you think.

More clothes would be cool, we have plenty guns but you cannot get enough guns, changes to paralake's map would be good aswell (Change the slums ramp).

More legal ways to make money so that we have something else/better to do than growing all the time or just staying police 24/7. What happened to @StephenPuffs Player-Owned Economy?

EDIT:
It seems people are chosing more changes to the map. I swear you'll enjoy the new things for ONE DAY and then you'll forget about it. IMO more jobs are way better, then you can actually roleplay as a lot more. For example, a construction worker, a laborer, warehouse worker. The list goes on. And like the Player Owned Economy it would make it a lot more (god save me for saying this) realistic.

Plz its all i want​

More legal jobs and that would mean changes for the map. Ideas: Auto salesman (can sell vehicles lets say 1.5% cheaper but gets that 1.5% for himself) , Real estate salesman (sells for exapmple subs houses, same thing as with cars but make it like 30%), Janitor (just for rp), etc.

I'd say that at the current food is neglected. Everyone buys just burgers as they give the best food, coffee as they give the best energy and the rest is just only used in an emergency. To be honest I think that we need more food and drink, and to balance the overpowered burger and coffee. For example, eating too many burgers could cause a decrease in stamina?

I would like to see some new map changes for example farming jobs in the farm or some sort of jobs in Fredy's bakery etc. I feel like we have lots of plebes in the map already that can be used for legal ways to make money.

Changing the map would be good, some really overpowered areas to base atm.

Food choices sounds pretty funny. Would love to see some MEME side effects.

For a while now I've seen a lot of people wanting more cars, I think it's about time we get some new cars!

If we are adding more weapons, I am doing some research for this below will be links from official site(s) These are only a few

What I'd want most is more legal ways of making money, this is because I'm sick and tired of just drugs and stuff, it's literally all people do now a days,

I'd also want a change on how the drug dealer works, not with mugging but for cops to have a way of finding out who sold drugs and such, this would stop the "safety" that people have now with drugs, might be something that would work? Opinions?

I'm just going to drop some nice pictures of cars here because why not. hint hint This is all that I came up with at the first few seconds.

I would personally like to see the following firearms:

"player owned economy" or some shit. wtf happened to that man! We need that pronto (pi<<a) XDDDDD

LOWKEY
You must log in or register to reply here.

Influential factors of why the player count has decreased rapidly